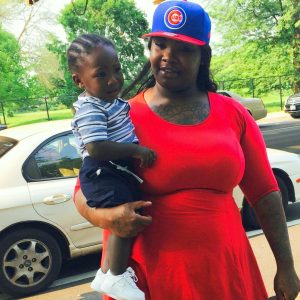 Naomi Freeman has been released thanks to your tremendous generosity! In total, 345 people donated to Naomi’s freedom in amounts ranging from $3 to $1,000. Your donations made it possible to secure Naomi’s release on bond yesterday, December 23, 2015. You joined Naomi’s family and a host of grassroots organizations to raise almost $13,000 in less than a week. That amount was enough to fill the gap in Naomi’s bond ($35,000) and a $26,000 grant to CCBF from the Women’s Justice Fund (WJF). The WJF was established in the 1990s specifically to post bond for domestic violence survivors who had been criminalized for actions taken in self-defense. Since its creation, the WJF has been housed at Crossroads Fund, but was accessed infrequently in recent years. Partially as a result of this successful campaign to #FreeNaomiFreeman, the WJF has now been transferred to the Chicago Community Bond Fund (CCBF), where it will remain available as a revolving fund designated to serving women charged with crimes related to self-defense. Furthermore, because your efforts raised $3,000 more than the amount needed for Naomi’s bond, the Chicago Community Bond Fund will use that money to bond out more people. Survivors of abuse, pregnant women, and others will benefit from these additional funds. And, when Naomi’s case is over, her bond will be returned to the Women’s Justice Fund at CCBF, where it will be available to bond out other survivors of abuse in the future. Your contributions made this all possible. Together we secured the entire $35,000 needed to reunite Naomi with her children by Christmas. Thank you. Your solidarity freed Naomi from the cages of Cook County Jail, but Naomi’s case is far from over. We invite you to join us in solidarity with Naomi and her family as her case continues. Now that she is released on bond, Naomi is in the best position to assist in her own defense. As many of you may know already, people who are incarcerated before trial are many times more likely to be convicted than those who are released on bond. This solidarity has potentially changed the course of Naomi’s life. As many of you know, more than 75% of women in prison are survivors of domestic violence, and that violence often connects directly to the circumstances of their arrest. In 19 states, including Illinois, there are also laws that criminalize women for the violence their children experience as a result of their abusers. Charged under these “failure to protect” laws, women often serve years more time than the abuser. We have much work to do, friends, but we hope that as a result of our collective efforts to see Naomi released, we have contributed to a growing mobilization to push back against the criminalization of women, disproportionately Black and Indigenous, for self-defense and survival. Most crucially, all of us organizing in solidarity with Naomi want to honor her survival and her commitment to healing. Naomi has been moved by your support. When we first met Naomi in Cook County Jail, she was so overcome by the trauma of her experience that she was surprised to know that there were people who were ready to advocate for her, though she did have support from her immediate family. At this point, she is overcome by the love and solidarity she feels from all of you. Please read Naomi’s own words, now that she’s been released:

“I just want to say thanks to everyone that helped me reunite back with my family — especially in time for Christmas. Love to you all and happy holidays from me and the entire Freeman family.” – Naomi Freeman

Thank you again for all of your support for Naomi and her family. If you are interested in continuing to support Naomi as she fights her case, please contact Moms United Against Violence and Incarceration by emailing Holly at holly.krig@gmail.com. To donate to help the Chicago Community Bond Fund continue, sign up for our mailing list, or learn more, you can vist our site.

Someday I will need to explain to my kids why they don’t have their father. I never meant to hurt him that day, I only acted in fear for my life. I have to forgive myself, but not for surviving, and I don’t think I should be punished for defending my life. I have to get home to my kids as soon as I can and be the best mother I can be. I need a second chance at life for them and for myself. — Naomi Freeman, 12/6/2015, Cook County Jail

On July 5, 2015, Naomi Freeman chose to survive. Naomi is a 23 year old Black woman from Chicago and the mother of 1 and 2 year old children. In choosing to survive that day, Naomi Freeman unwittingly joined the ranks of Marissa Alexander, Cierra Finkley, Cherelle Baldwin, Paris Knox, Tewkunzi Green, Eisha Love, and many women who made the split-second choice to survive rather than die at the hands of an abuser. Also like them, she was arrested for it. Some of these women are still awaiting trial while some are already serving decades in prison and seeking clemency. Marissa Alexander, however, avoided her initial 60-year sentence after successful public pressure and fundraising support. Cierra Finkley was also released after her charges were dropped. Naomi should be free as well, and can be with your help.

Like many of the women named above, Naomi chose to survive an attack by an abusive partner. We know from Naomi and other eyewitnesses that Naomi was pulled from a vehicle by her hair and slammed to the ground. Once on the ground, Naomi was beaten and punched in the face no fewer than 20 times. During this assault, Naomi was in the early stages of pregnancy and suffering a chronic autoimmune disease that affects her joints. Sadly, this was not the first time Naomi had been assaulted by this man. Had Naomi not acted in self-defense, it is likely that she would be dead. Instead, like many other women and girls incarcerated right now, who are disproportionately Black, she survived and was punished for it.

As of December 8th, Naomi has been in Cook County Jail for nearly 6 months. Naomi’s pregnancy is complicated by Lupus and the ongoing traumas of pre-trial detention and separation from her two young children. For saving her own life, Naomi Freeman is being charged with 1st-degree murder and is being held on $350,000 bond (reduced from $500,000). It is our intention to support Naomi by working alongside her family to advocate for the dismissal of these outrageous charges by Cook County State’s Attorney Anita Alvarez. Right now, though, Naomi urgently needs $35,000 cash to secure her release from the jail that will mean: a return to her children, proper maternal health care, and the best possible position to assist in her own defense. Her family is working hard to raise this money by pooling their limited resources and doing fundraising dinners, but $35,000 is far more than most people ever see at one time.

Right now, we ask what can you do in solidarity with Naomi, her children, and family? What can you do in solidarity with all the women and girls criminalized for self-defense who are denied the right to survive by a system that perpetuates all forms of violence? Will you donate what you can? Will you encourage others to donate and share with their own networks? Please stand with Naomi and the family that supports her with love and what little resources they have. Please bring Naomi back to her very young children, who ask about her every day. Join us and #FreeNaomiFreeman before Christmas.

With Love and Solidarity,