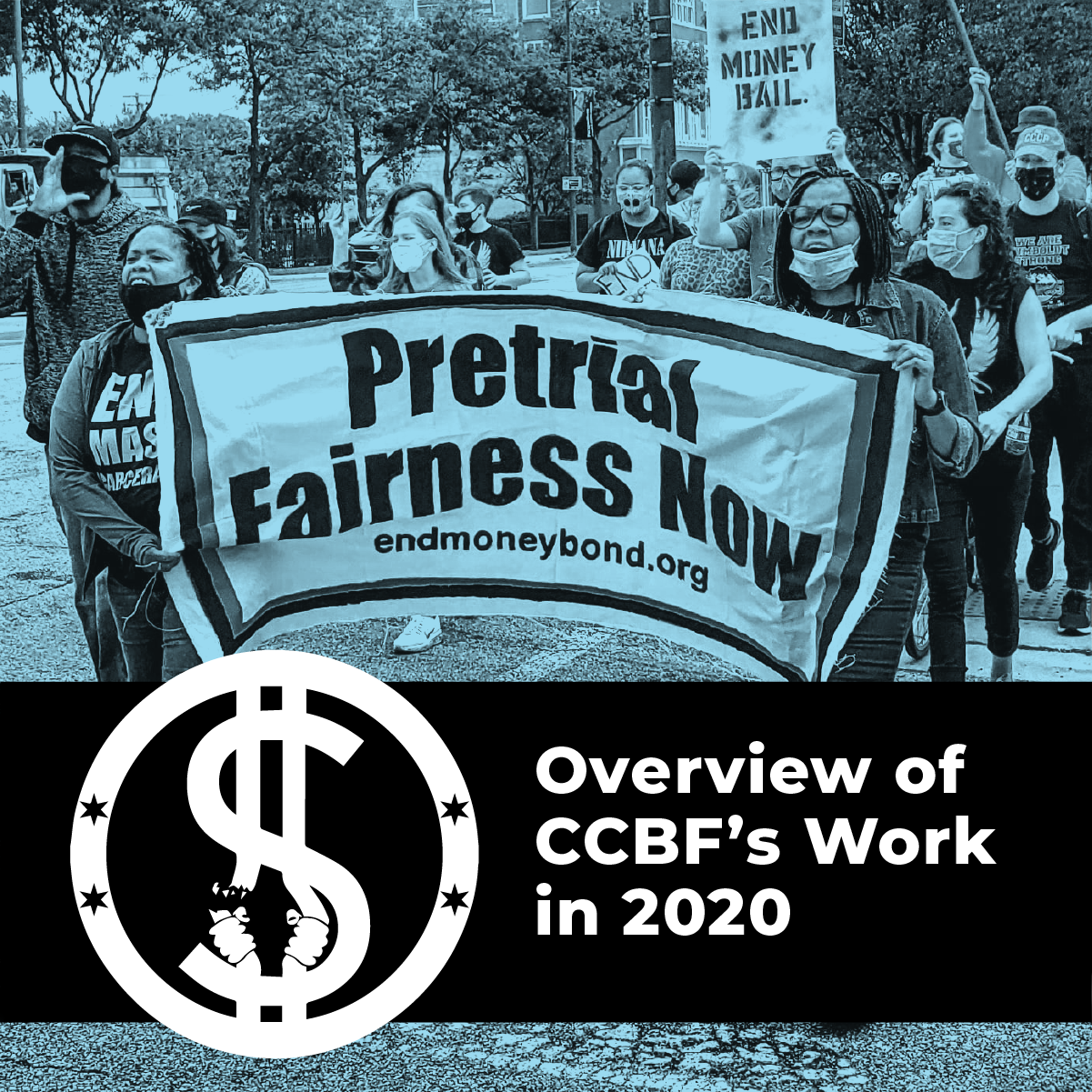 In 2020, Chicago Community Bond Fund celebrated the fifth anniversary of our launch! In just five years, we have helped win policy changes that dramatically reduced the number of people incarcerated in Cook County Jail and been part of building a movement to end money bond across Illinois. We do this work in partnership with our fellow members of the Coalition to End Money Bond* and the Illinois Network for Pretrial Justice and alongside many organizations and individuals locally and nationally. CCBF has also created a sustainable, revolving community bail fund that has now paid over $4 million in bond to free more than 600 people from jails in Illinois—more than half paid this year. 2020 presented CCBF with a pandemic, uprisings for Black lives, and the opportunity to end money bond in Illinois through transformative legislation. To respond to each, we worked closely with our partners in the Coalition and Network, Chicago’s abolitionist organizers, and civil rights attorneys. We are immensely proud of the work we did together this year as a movement, and we hope you are, too.

Throughout the year, CCBF worked with our partners in the Coalition to End Money Bond and the Illinois Network for Pretrial Justice to push for the passage of the Pretrial Fairness Act, a bill that will end money bond and dramatically reduce the number of people incarcerated pretrial in our state. This legislation is an updated version of the bill the Coalition wrote and has been supporting since 2017, but our organizing ramped up in early 2020 following Governor JB Pritzker’s announcement that ending money bond would be one of his key criminal justice priorities. Working with hundreds of people from across Illinois, we spoke with dozens of legislators during two massive lobby days: one in-person just weeks before the state shut down, and another virtually in November. CCBF also helped organize a statewide day of action and multiple town halls with State Senator Robert Peters. Two reports on the need to end money bond were published with our Network partners this year. The first outlines our shared Vision for a Just Pretrial System and the second evaluates the Illinois Supreme Court Commission on Pretrial Practices’ final report. While the Illinois legislature ultimately never resumed regular session following its abrupt COVID-19 related closure in March, CCBF and our partners worked through the most difficult of circumstances to tee up victory in 2021.

In early March, CCBF was the first to sound the alarm about the crisis COVID-19 would create inside Cook County Jail. Before the end of the month, people incarcerated in the jail began to test positive for the virus. Working in partnership with more than 100 advocacy, community, and legal organizations and unions, we called on the Cook County Sheriff, State’s Attorney, and Chief Judge to undertake a mass release of people incarcerated in Cook County Jail, improve conditions for anyone not released, and expand rights for people on electronic monitoring. Through a colossal public awareness campaign, litigation efforts with the Cook County Public Defender’s office, a persistent call-in campaign, amplifying the voices of directly impacted people, a gigantic car caravan, a vigil by faith leaders, a mass bailout with RFK Human Rights and Believers Bail Out, petitions, and more, CCBF and our partners were able to reduce the number of people incarcerated in the jail by more than 1,300 per day in the spring. In April, we worked with Loevy & Loevy, the Roderick and Solange MacArthur Justice Center, and Civil Rights Corps to file a class action lawsuit challenging the conditions inside Cook County Jail during the pandemic. This effort engaged dozens of CCBF volunteers who operated a hotline for several weeks to interview people incarcerated in the jail about their experiences so that their statements could be used in court. The lawsuit successfully won significant protections for people inside the jail that unquestionably saved lives. Following an order from the federal court, Cook County Jail began distributing masks to incarcerated people, increased the distribution of soap and hand sanitizer, and increased testing. For about two months, the Sheriff’s Office was also forced to socially distance people incarcerated in the jail, but Sheriff Tom Dart successfully worked to overturn that life-saving measure. Throughout the spring and summer, CCBF has continued to work with our partner organizations, family members of incarcerated loved ones, and Cassandra Gree-Lee, who emerged as a voice of movement following the death of her husband Nickolas Lee in April. In November, CCBF distributed stimulus check applications to everyone incarcerated in the jail and collected and submitted an estimated 3,000 applications on behalf of people inside. When received, the checks could provide people inside with a total of more than $3.5 million.

While CCBF’s advocacy work played a significant role in reducing the impact of COVID-19 on people incarcerated in Cook County Jail, eight people have lost their lives while in custody of the jail and hundreds more tested positive. CCBF worked with our friends at For the People Artists Collective to create a virtual memorial quilt honoring the lives of those lost to the virus in the jail. The project holds the men in a loving light and provides a stark contrast to the dehumanizing portrayals found in mainstream media. During this pandemic, unjust pretrial incarceration and unaffordable money bonds meant more than the loss of freedom, they meant the loss of life. This moment has magnified the need to meet the calls for abolition sounded by Black liberation movements. For more reflections on our COVID-19 advocacy, read “Protecting Public Health Through Decarceration,” a report released with our partners in the Coalition to End Money Bond.

On May 25th, Minneapolis police murdered George Floyd. In response, people across the world rose up to reject police violence and anti-Black racism. In Chicago, thousands of people were arrested while demanding justice for George Floyd, Breona Taylor, and Tony McDade. Hundreds of people passed through Cook County’s central bond court. Hundreds of thousands of people all over the world rallied behind those in the streets, donating over $5 million to CCBF in support of the uprisings. We responded by paying bond for everyone arrested in connection with the uprising who needed it—not just in Cook County, but across the state. Since May 29th, CCBF has paid over $1 million in bond to free 250 people arrested on protest-related charges across Illinois. We are honored to be entrusted with these movement resources and to have been able to support the people risking their lives in the streets to bring forth a better world out of the ashes of this one.

The unprecedented support CCBF received during the uprisings also enabled us to pay a $400,000 bond to free trafficking survivor Chrystul Kizer in Kenosha, Wisconsin. We worked with the Chrystul Kizer Defense Committee, Milwaukee Freedom Fund, and Survived & Punished to ensure Chrystul can continue fighting her case from outside of a cage and with the support of her community. When Chrystul’s case ends, the bond money CCBF paid will be used to establish a national bail fund for criminalized survivors of domestic and sexual violence under the direction of Survived & Punished and housed at the National Bail Fund Network.

The expansion of CCBF’s work over the summer also led to other advocacy opportunities. While paying bond for people arrested at Black Lives Matter protests in Rockford, Illinois, we learned that people arrested on Friday evenings or on weekends are incarcerated in the Winnebago County Jail and routinely denied required bond hearing until the next regular business day. The lack of weekend bond hearings in Winnebago County results in extended detentions without any hearing before a judge and violates the Fourth Amendment. Working with the people inside and their supporters, we engaged civil rights attorneys Adele Nicholas and Brad Thomson to file a lawsuit in Winnebago County challenging this practice.

In the wake of the summer uprisings for racial justice, CCBF worked with our partners The People’s Lobby, Southsiders Organized for Unity and Liberation (SOUL), Shriver Center on Poverty Law, and National Nurses United to run a campaign to Defund Cook County Jail. In addition to hosting actions and organizing people to contact the Cook County Board, we supported Cook County Commissioner Brandon Johnson’s effort to pass the Justice for Black Lives Resolution. The resolution publicly acknowledges the devastating impact that systems of policing and incarceration have on Black communities and commits Cook County to divesting resources from those systems and investing them into services that truly meet community needs. Throughout the fall, our organizations worked with more than 40 other groups to demand the county adopt our Budget for Black Lives, which would have cut the Sheriff’s Office budget by $157 million and moved that money into housing, restorative justice, jobs, health care, and more. While the 2021 budget ultimately passed by the Cook County Board failed to meet our demands, it did cut $25.9 million from the Sheriff’s budget and add $42 million worth of investments into the community resources we called for in our proposal.

As we step into 2021, we look forward to the victories ahead: ending money bond in Illinois, dramatically reducing the number of people incarcerated while awaiting trial, and reinvesting the money previously used to cage Black and Brown people into resources that help those communities thrive. 2020 highlighted both the importance and inadequacy of bail funds in meeting the needs of our communities. While our revolving fund helped ensure that hundreds of people across Illinois fighting for a world without police violence were able to return to their communities as soon as possible after their arrests, our revolving fund proved wholly inadequate in addressing the threat COVID-19 posed to people incarcerated in Cook County Jail. While paying bail for community members who can’t afford it is an important act of solidarity and mutual aid, philanthropy will not end mass criminalization. We must end money bond and pretrial incarceration by taking the power to cage our neighbors away from the state. During the next legislative session, Illinois has the opportunity to end wealth-based pretrial incarceration. We look forward to working with you to win justice for our communities.

*The Coalition to End Money Bond is housed at CCBF.